I’m told my generation, (I refuse to say ‘Millennial’) values experience over material possessions. That a memory formed, or an adventure had is more important than the shiny new car. My intense desire for a Tesla would be my argument to that hypothesis but this experiential mentality is appealing and you can see it leaking into almost everything, including booze. There is definitely a trend towards one off releases and in the scotch world more small producers are creating blends not with the idea of creating decades long consistency but of constantly evolving smaller bottlings, aiming for consistent quality if not consistent flavor.

In the scotch world more small producers are creating blends not with the idea of creating decades long consistency but of constantly evolving smaller bottlings, aiming for consistent quality not consistent flavor.

Don Sutcliffe, of Sutcliffe and Sons, along with Willie Phillips, the former managing director of The Macallan, created The Exceptional Whiskies with this experiential philosophy at the forefront of mind. They say it outright. They’re not looking to create year-in, year-out consistency. They want each edition to be ‘individual’, ‘distinct’ and ‘memorable’. Since 2013 they’ve released 2 editions of the blended grain and their blended malt, and now they’ve got the first edition of their own blended scotch to add to the line up.

It follows in the same philosophical vein and draws on decades of experience and relationships. It takes grain whiskies from North British, Strathclyde and a 33 year old Cameron Bridge and blends them with single malts from seemingly all of Speyside including: Glenfarclas, Ben Nevis, Balvenie, Kininvie, Glen ddich, Alt- a’Bhainne, Auchroisk, Glenallachie,Westport, Speyside and a splash of 30 year old Macallan. Then all of that is finished in first fill Olorosso Sherry barrels. The result is fruity, rich, very light up front, with a honeycomb sweetness and a definite herbal nose.
So what’s the result? It’s good whisky. But is it any more than that? 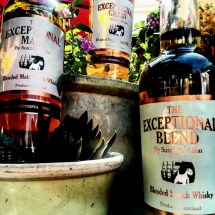 The cynic in me wants to say that the whole ‘unique experience’ is marketing talk for ‘we can’t get the ingredients to make this anymore.’ That it’s just another way to cash in on the whiskey boom. But looking at how long Don and Willie have been doing this it looks more like to men tired of doing the same thing day in and day out. It has the feel of wanting to find something new, to experience and share it. So what does the millennial in me say? That it’s not a generational thing. That it’s just a human thing.