Drinking Poetic: The Ship of Theseus

I compete in a lot of bartender competitions. Not only is it a great tool for advancing my career I also just find it fun. Like really fun. I love the whole shebang. I have a background in theater so I spend a lot of time crafting the oration and spectacle of the presentation trying to meld the drink with the competition performance. But ultimately, those 6-8 minutes presenting make up a fraction of the work that goes into competing. Because it doesn’t matter how great your soliloquy is if the drink doesn’t match up.

The R&D is where the true spirit, and fun, of these competitions lay. I’m incredibly fortunate to have an amazing collaborator in the form of my lovely, talented, and extremely patient girlfriend and some, if not all, of my best drinks have come out of R&D with her for these competitions. A lot of ideas end up on the cutting room floor only to find themselves resurrected for a cocktail menu down the line. Or sometimes ideas that have been kicking around your head find the absolute perfect outlet in a competition prompt.

That was the serendipitous case with The Ship of Theseus.

One of the cocktail prompts for Heaven Hill’s Bartender of the Year 2017 was to submit a drink based on a classic cocktail. This isn’t an unusual prompt but its one that’s always been difficult for me because, in my experience, drinks based on classics are really just classics with a part replaced. Can those really be called original cocktails?

This problem of identity is something that I would think about late night, several whiskies in while closing the bar and when it came up for the competition my late night musing immediately turned my thoughts to “the Ship of Theseus.”

The original Ship of Theseus isn’t a drink but a philosophical conundrum that has been debated for centuries And it goes like this: Theseus, the classic Greek hero who slew the minotaur, has a ship. On that much everyone can agree. But after slaying the minotaur Theseus returns to port needing a few repairs on the ship and a few replacement crewmembers. He then returns to adventuring and doing more hero things. This of course leads to more repairs and replacements. This time the mast, next time the rudder, this time a first mate that foolishly headed the siren’s call. Eventually every last plank, rivet and crew member of the ship has been replaced. With none of it’s original components intact is this still the ship of Theseus? And if it’s not when did it stop being that original ship? After the first repair? After the 31st?

Let’s make it even more complicated. Lets say the shipwrights doing the repairs saved all of the pieces they replaced and built another ship out of them and the two ships now float side by side in the harbor. Which one is the original and which one is merely ‘inspired by’?

While giving this long winded explanation to my girlfriend (have I mentioned how patient she is?) she casually asked if there were any ship based classic drinks which immediately brought up one of my least favorite drinks, the Remember The Maine. It first appears in Charles H. Baker’s 1939 book the Gentleman’s Companion and traditionally looks like this:

Stir on ice and serve up.

Named after the U.S.S. Maine, a battleship sunk under suspicious circumstances of the coast of Cuba who’s sinking was used to insight the Spanish-American War with the battle cry “Remember the Maine, to Hell with Spain.” The drink has always fell flat for me so it seemed like the ideal ship to hit with a few “repairs.”

First, the Maine isn’t a true cocktail because it doesn’t contain any bitters so a few dashes of orange bitters were added. Next, the Cherry Herring in the Maine is one of my least favorite ingredients. I find it overly sweet and muddled, so I subbed it out for Kirschwasser, true cherry brandy. This made the drink brighter, more fruit forward and drier. This allowed the vermouth to be swapped to a Chinato style that added in an extra bittersweet quality to balance out the kirsch. Then the base remained rye whiskey, after all you need certain key features to be a ship, but using Rittenhouse BiB adds a depth and a back bone that is more specific than calling out for a “rye.” The drink ended up with an elegance and subtly that the absinthe in the original would have destroyed so the absinthe was dropped in favor of a chartreuse rinse on the glass to lend those floral, herbal notes with out disrupting the ships internal balance. 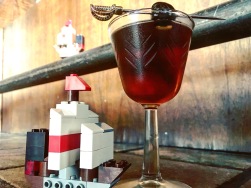 Stir on ice. Strain into a cocktail glass rinsed with

Garnish with a marasca cherry

Both ships now get to float side by side completely distinct. The Ship of Theseus is clearly no longer just a variation of the Remember the Maine but I’d be hard pressed to tell you when that change over happened. It’s a conundrum that deserves a drink of mythic proportions and I think I might have just the perfect one for it.