Larceny is not theft.

It’s theft of your time, your ability to make informed decisions and ultimately your money. It’s spending those things with the expectation of one product and getting something at best tangentially related. The liquor world is awash with claims that straddle this divide. American whiskey is the major culprit these days.

The whiskey world is obsessed with authenticity, real or manufactured. We want the 264 year old history of your brand, even though it was just started three years ago. Preferably in convenient sound byte form, downloaded instantly so that when we buy your $50+ bottle we can rest assured that despite it being made in a factory in Indiana we know that you found the recipe in your great grand aunt’s attic.

There are dozens of examples of brands doing it wrong but they get enough ink spent on them. Instead let’s talk about people doing it well and say again: Larceny is not theft.

So, what is Larceny?

It’s a story. A perfect marketing story. Before Prohibition there was a man named John E. Fitzgerald. He never distilled a drop and he never had a distillery. H 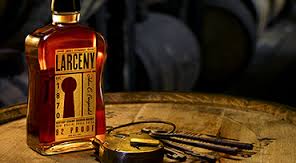 e did have keys to a bonded warehouse where they aged whiskey and was known to “sample” barrels. Sample- read: pilfered. Despite his acts of theft being well known Fitzgerald kept his job. In fact, the company started calling particularly good barrels “Fitzgeralds” and ended up naming a brand after him, all bottled from only the best barrels. After Prohibition the brand was sold to Pappy Van Winkle where it became his flagship brand at Stitzel-Weller.

But as you know from our talk about Pappy last week, Stitzel-Weller closed in 1992. The brand, and some aging whiskey, transferred to Heaven Hill where they created a heated mash bill to keep “Old Fitzgerald” consistent. That is until 2012, when Heaven Hill removed Old Fitz from almost every market and presented us with Larceny. Same juice, but named for the crime. Not the man.

What does this have to do with the whiskey?

Not a damn thing.

It’s all marketing. All a story. John E. Fitzgerald’s Larceny has no more connection to the purported original act of theft than it does to the whiskey made at Stizel-Weller or the whiskey sold before Prohibition. But it’s a story we all tell, something that gets us talking about this bottle.

And it’s still the spirit of Old Fitz. It’s still the same whiskey they were making before the name change. It’s the same mashbill inside the bottle, different proof, no age statement and still nutty, slightly rough around the edges with a dark, dark cherry note ringing through the center. But tasting notes aren’t enough on their own.Tasting notes don’t sell, history does.

In the end is the Larceny a theft?. No, it’s just a fresh coat of paint on a well worn Kentucky barn. It’s still the same whiskey inside.