The world's on fire and anything can be a parking lot. But at least we live here, at the edge of it all.
I love a good story and Nikka Whisky certainly has a good story. A story of both an excellently crafted whiskey but also a phenomenal story of the life of the company’s founder, Masataka Taketsuru. The month of January is especially important to the story of Taketsuru and his redheaded Scottish wife, Rita. So, I thought I’d take some time and look at a few of Nikka’s offerings for the rest of January. First up on Bottledinbondla.com is a wee dram of Nikka Days.
Sometimes I make drinks. Sometimes I look like a Mafia Don. Sometimes I do both. 📸: @eugeneshoots
There's a new post up on BottledInBondLA.com. A few weeks ago @highproofpreacher posted this photo of the Banana Dance cocktail.fdom a shoot last year. Not only is it a beautiful shot but it reminded me that despite the Banana Dance being one of my favorite cocktails of the past few years I hadn't made a post about it. Head to BottledInBondLA.com to read about all the quirky banana details or just check out the recipe below. The Banana Dance: 1.5 oz Banana Infused Sherry .5 oz Greenspot Irish Whiskey .5 oz Brown Butter Falernum .5 oz Blanc Vermouth .25 oz Punt e Mrs Tsp Nocino Tsp Verjus Blanc Combine all ingredients in a mixing glass. Short stir with Kold Draft Ice. Strain into a stemmed cocktail glass garnished with a chocolate ganache brush stroke.
Empty bottles for the first Whiskey Wednesday of 2020 to salute everyone partaking in Dry January. You can read more of my thoughts on Dry January on BottledInBondLA.com And remember, everything in moderation. Even moderation.
I am proud to once again say that I am one of the West Coast Semi-Finalists for the Heaven Hill @bartenderoftheyear competition. I have entered this competition every year since it's inception. I've completely failed to make it past paper judging, I've made it to the National Finals, and everywhere in between. This competition, these brands, but most importantly this family that I have become apart of and shared myself with these past five years hold a special place in my heart. I'm looking forward to doing it all over again in a few weeks. 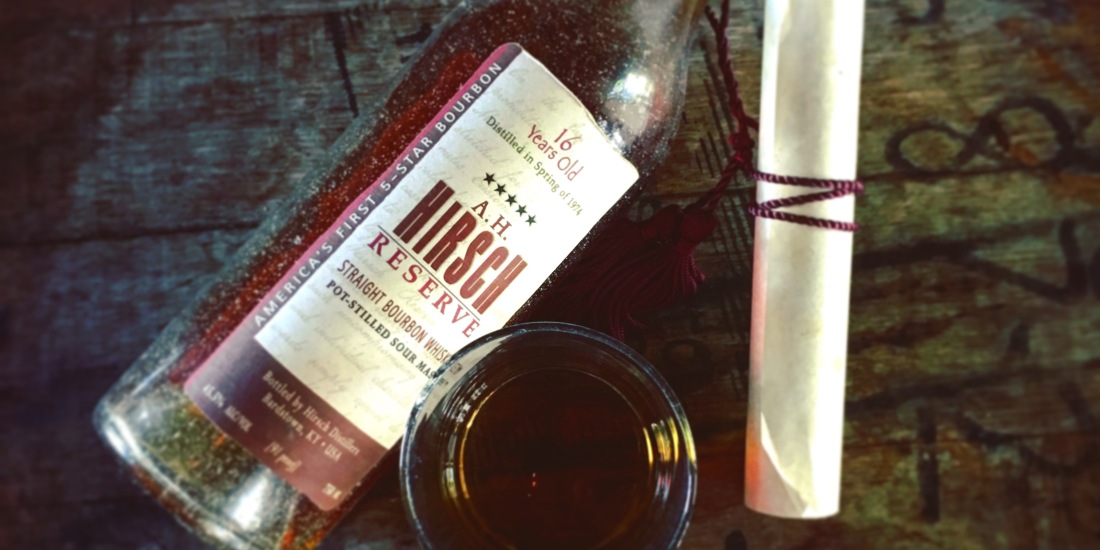 I’m absurdly lucky in my line of work. I get to taste things that are often considered legends and even more exciting get to stock them at the bar occasionally. Most of these bottles are outside the scope of being able to feature them on a typical Whiskey Wednesday but they all have a story, and all of them are open. So, I’m going to take advantage of this abundance of good fortune and drink my way through them and let you vicariously drink through me.

For our first go around we got a real unicorn of a bottle: the A.H. Hirsch 16 Year Straight Bourbon whiskey. This bottle, along with the original Pappy Van Winkle releases, are what kicked off the super premium Bourbon trend. There’s a great book about its full story called The Best Bourbon You’ll Never Taste by Chuck Cowdry so we’ll do the abridged version here.

Our story begins in a small farm outside of Schaferstow

n, PA in 1753. John Sheck was doing what most farmers did at the time and was simply distilling as a way to maximize his harvest and make a little extra cash from excess grain. There was no formula to it. But over the next 163 the family grew this small operation into a full blown distillery until they were forced to close the doors in 1919 due to the beast that was Prohibition.

During Prohibition the distillery and farm was sold to a local farmer who more than likely kept the stills warm with a few runs despite Prohibition and after repeal distilling commenced in full force yet again. The distillery changed hands several times in the next few years before being bought by the Schenley Corporation. Schenley was to the American spirits world of the 1940’s what Diageo is to world spirits today. Which is appropriate since Schenley was sold to Guinness in 1986 and Guiness’ merger with Grand Metropolitan in 1997 was the birth of Diageo.

But well before then the distillery had changed hand yet again, this time to Pennco Distillers, and was now know as the Michter’s Distillery. They had new owners, a new

brand, and Charles Everett Beam, of the Beam family fame, as master distiller. They were ready to rock and roll. Yet despite having limited success with the Michter’s Sour Mash Whiskey (which may or may not have been pot stilled) and being named a National Historic Landmark in 1980 the demand for Bourbon just wasn’t there. What may have been the oldest distillery in the United States closed its doors for good in 1989 and is now just a collection of abandoned buildings.

What does any of this have to do with Hirsch? In the spring of 1974 A.H. Hirsch was one of the major investors in the distillery. And as you may have heard the ‘70s were not a good time for American whiskey and the distillery was strapped for cash. Rather than invest more money into the distillery Hirsch commissioned Charles Everett Beam to make him a whiskey. It was a different mashbill than the sour mash Michter’s was making at the time. It was a true Bourbon and the run produced a measly 400 barrels. This commission did two things: it gave the distillery a quick influx of cash and gave Hirsch an investment that he could sell no matter what happened to the distillery in the future.

And Hirsch never cashed that investment in. Oddly he left it aging in the warehouses, paying taxes on all 400 barrels until the distillery shuttered. Now sitting at a solid 16 years old, ancient by Bourbon standards at the time, Hirsch finally took position and sold of the stock.

The new owners transferred the whiskey to stainless steel tanks to prevent further aging and started bottling the whiskey, naming it in honor of A.H. Hirsch himself. And in another quirk of the incredibly small whiskey world some of the first bottlings were done by Julian Van Winkle III at the same bottling plant he would latter start bottling another famous whiskey named after his Pappy.

The whiskey hit the shelves at around $50 a bottle, again astronomically high for the time, but it turns out it was damn good. Deep leather and tobacco, with nougat  and dried cherry and orange. It’s literally history in a glass. It can never be recreated. The moment in time, and even the distillery are long gone. Unlike your Pappy Van Winkle’s or George T. Stagg’s this piece of Americana will never come around again.

People loved it. It’s a prime example of the excellence that can come from extra aged American whiskey. The bottle became a legend and definitely fueled the love for old Bourbons, and their price tags.
Once, Preiss Imports discovered the following for Hirsch they pulled the last remaining bottles and repacked them in a massive collectors edition with a more massive price tag. It was still possible to order A.H. Hirsch for your bar. If you were willing to shell out for it.

So does it live up to the hype? It’s impossible to say. This bottle is so wrapped up in its history that I can taste it right there next to the oak and vanilla. Despite Chuck’s claim that it’s the best you’ll never taste it’s still out there. And you should taste the history. But, don’t cling to the past. A.H. Hirsch had it’s moment in time. The next moment is out there.