“I prefer things the Old Fashioned Way!” said every generation ever as things changed around them.

The Old Fashioned is my favorite cocktail. It appeals to me on such a deeply intellectual level that it rivals the psychic imprint that Lord of the Rings had on me in the third grade. And the imprint this simple drink has had on the world of cocktails is just as deep. But what exactly is an Old Fashioned?

Due to the past 15 years of the Cocktail Resurgence and the dissemination of information on the Internet, most bartenders outside of Wisconsin will tell you that an Old Fashioned is a basic cocktail comprised of Spirit, sugar, bitters, and water/dilution. If they’re particularly good they might ask if you have a preference on Bourbon or Rye but most would balk at the idea of making it with a different spirit or, god forbid!, serving it up instead of on the rocks. Yet all of these are part of the innumerable variables that are a part of the drink’s history.

Over the past 200 years the drink has survived, thrived, been basterdized, been reinvented, reimagined and misunderstood. But why does it work?

An Old Fashioned is quite simply the Ur-Cocktail. The original, OG, never to be replicated, cocktail. Once upon a time, when words and facts still meant something, a cocktail was just one of many mixed drinks families that each had their own rules and regulations for entrance to the family retreats.

The original definition of “cocktail” first appears in a newspaper in Hudson, New York on May 13th, 1806. In answer to the question, “What is a cocktail?” editor Harry Croswell responds, “Cock-tail is a stimulating liquor, composed of spirits of any kind, sugar, water, and bitters—it is vulgarly called bittered sling, and is supposed to be an excellent electioneering potion, in as much as it renders the heart stout and bold, at the same time that it fuddles the head. It is said, also to be of great use to a democratic candidate: because a person, having swallowed a glass of it, is ready to swallow any thing else.” Sounds familiar doesn’t it?

While later generations of bartenders would claim the drink was invented at The Pendennis Club in the 1880s the etymological roots of the drink have always been more believable to me. As you may imagine drinks were made very differently in the early 1800s from how they are now, no matter how “pre-Prohibition” a place claims to be deep down we know it’s not the same. Now imagine that you actually did know what it used to be like and all these new changes, changes like plentiful ice and clean water for making simple syrup, are ruining your favorite drink. So instead of getting it done with all these new age techniques you would ask for your cocktail “the old fashioned way.”

It all starts with that base spirit. Forevermore this drink will be linked to whiskey but it works with any base spirit, any at all.

Over the past 200 years the drink has survived, thrived, been basterdized, been reinvented, reimagined and misunderstood. But why does it work? Why has this drink lasted through the centuries why so many others have disappeared to never be drunk again? This is what triggers my intellectual arousal.

What this drink does is trick our brains. It takes basic tools, and basic culinary science, and polishes the rough edges off of a spirit allowing the heart and magic that is the core of it’s flavor. Unlike a sour or a daisy that seeks to fully incorporate a wide range of flavors into one cohesive whole, essentially masking the alcohol, this seeks to enhance the elements that are already there. It highlights the spirit.

It all starts with that base spirit. Forevermore this drink will be linked to whiskey but it works with any base spirit, any at all. Into the glass goes a fiery, untamed, uncultured pour of pure unadulterated water of life in what ever form you please. The base is laid and everything that emerges from this drink is birthed from this primordial ethanol ocean. 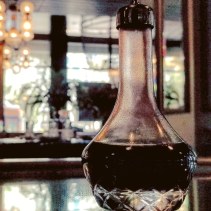 Next is added a few short dashes of bitters. Bitter is an interesting flavor. Science still debates why exactly we taste bitter but the general consensus is that we evolved the capacity as a way to detect poisonous plants. This is also why a little bitter goes such a long way. Our brains are hardwired to recognize the bitter before anything else. It doesn’t matter how mouthwatering delicious something is if it’s going to ultimately kill you. Now couple this with the fact that pure alcohol is actually poison but doesn’t actually taste like anything. What we often recognize as “alcohol” is really just the upfront burn. This touch of bitter is a stage magician. We’re so focused on the bitter that we don’t notice the alcoholic burn that it just slipped past our taste buds.

But bitter tastes are unpleasant and while it only takes a splash to fool our monkey brains the end drink shouldn’t taste bitter. This is where a spoonful of sugar helps the medicine go down. A touch of sweetener rebalances the added bitter element. It should not be sweet, it should not be cloying, it should be just enough to balance the flavor scales.

Next up is dilution. While alcohol itself has no flavor it acts as a great transport for flavor. Ethanol caries those flavors molecules in a magical solution but it keeps them locked up tightly. A little dilution opens those locks and lets the heart, the true flavor burst through.

Then the drink is finished the same way it’s started with a touch of aromatic, these days in the form of expressed citrus oils to enhance the newly awakened flavors but in the drinks proto-form nutmeg was also used. The idea is once again to sneak past that alcohol burn, except this time we’re pulling a fast one on our olfactory sense.

All of this combines for the perfect cocktail. All of the parts are interchangeable. Change the sugar for vermouth and you end up with a Manhattan or a martini. Swap the dash of bitters for a grand bitter like Campari, a bottled form of that bittersweet, and you end up with a negroni or a boulevardier. Or simply take the sugar, turn it into a simple syrup, fully dilute the cocktail and serve it up and you end up with a New Fashioned Cocktail. The very process and innovation that the first drinker shook their fist at and declared that they wanted an Old Fashioned with their muddled sugar cube and ice IN the glass.

So, after all that how do I drink my Old Fashioneds? Intellectually.

But also with a small brown sugar cube soaked with Angostura bitters, just enough to saturate the cube, then dropped into the bottom of a rocks glass. Add a splash of soda water, just enough to allow the bitters soaked sugar to be easily and fully muddled. Add two ounces of Bonded Rye whiskey, a large ice cube, stir, and then express the oil from a small slice of lemon and of orange over the top. Sip, drain, and repeat until the dawn comes.