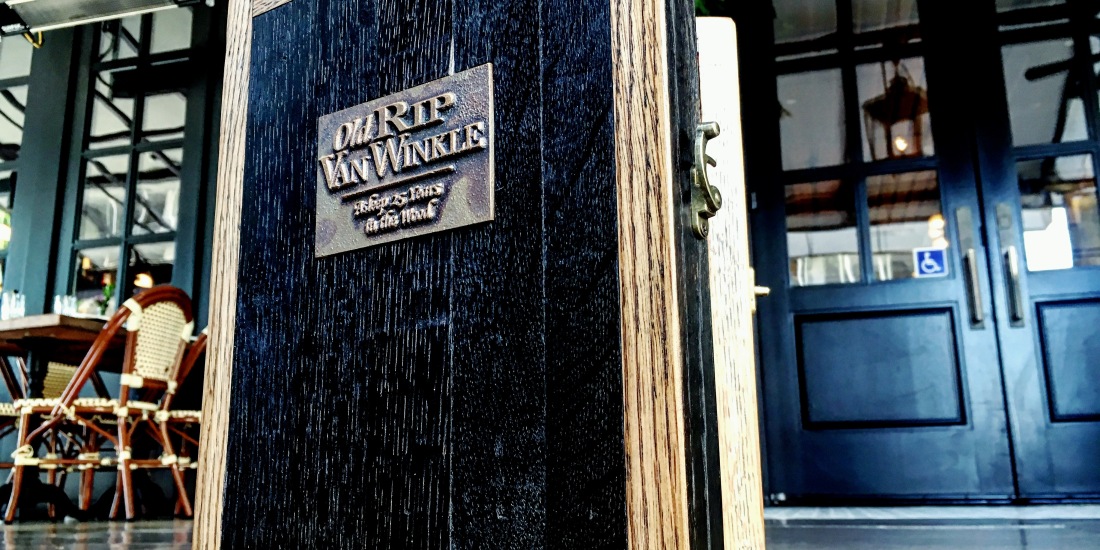 Pappy Mania has struck early this year and for the first time in years even I’m feeling a bit of hype.

The early onset of this yearly bourbon malady is the amazing limited release of an Old Rip Van Winkle 25 Year Old Kentucky Straight Bourbon. What makes it hype worthy is that fact that like the A.H. Hirsch 16 Year Special Reserve this bottle is a piece of history. A gussied up, fancy decanter of liquid history.

My feelings on Pappy and the bottle hunting that surrounds it are pretty well documented,  but unlike the yearly release of what you could now call the standard Van Winkle’s this bottle is something different. This is actual Stitzel-Weller Bourbon.

Distilled in the Spring and Fall of 1989, the 11 barrels that comprise this release were aged on the lower floors of the metal clad warehouses at Stitzel-Weller that shut

down in 1992. But just because the distillery stopped making spirit doesn’t mean the whiskey stopped aging. Leftover stocks continued to rest at the warehouse with some being sold off and some being bottled for various brands but these barrels stayed in the family. In 2002 they were transferred to Buffalo Trace where they aged for another 12 years on the lower floors of one of Buffalo Traces brick warehouses. In 2014 the whiskey was dumped into steel tanks. This isn’t an uncommon practice with older whiskies, the past few releases of Sazerac 18 Year Old Rye have been steel tanked, and it simply halts the oak aging process.  Oxidation can still happen but this is certainly not an aging experiment, nor can it legally be considered aged in steel tanks. It is simply an attempt to keep the whiskey from becoming over oaked and undrinkable.

So what were they doing with the whiskey for the next 2.5 years? They were figuring out how to sell it. Whiskey this old is a massive expense in time, labor, and lost product so it needs to have an appropriate price tag, but you also need to convince people that it’s worth the price tag. It doesn’t seem like that would be a problem with a bottle of Pappy Van Winkle but they pulled out all the stops for this release.

The massive box each of the 710 bottles comes in is made out of the oak staves from the 11 barrels the whiskey aged in. The Glencairn Crystal Studio designed a bespoke decanter, every bottle is signed by Julian Van Winkle, III and it comes with a parchment sheet with the short version of the whisky’s story. It’s a production.

At a mere 710 bottles, the secondary market for this bottle is literally drooling. But what’s interesting to me is that Buffalo Trace, and the Van Winkles, seem to be making steps to try and curb the flipping of this bottle. From what I’m told 9 bottles hit Los Angeles with maybe 30 for the whole state of California. But not a single bottle of those went to an Off Premise Liquor store. Every bottle was sent to a bar, with each bottle number being carefully recorded so that if a bottle does emerge on the Secondary Market they’ll be able to track it back to its source and supposedly punish the seller. While I appreciate the attempt to keep the bottles from becoming mere commodity trading with the secondary market already willing to pay $15,000 I can’t see these bottles actually staying on the shelves of all the bars they were allocated to.

But that’s the story ABOUT the whiskey, what about the whiskey itself? Bottled at

25 years old and 100 proof this Bourbon carries serious weight. The nose is of dried oak, dark coffee, and just a touch of stone fruit. The finish is almost nonexistent but it doesn’t matter because the mid-palette travels for hours. White pepper, caramelized oranges, deep ripe cherry, of course a vanilla and caramel note but what’s interesting is how well this walks the line massive oak flavor without being over oaked. Right when I was expecting it to dive into wet wood and raisins it instead let the pepper burn for another moment before evaporating completely on the tongue. This whiskey is better aged than the standard 23, and I’d say it’s at least as lively as the 20 year old.

I think bottling at 100 proof made a huge difference on the final product. The burn and the massive presence of the mid-palette flavors solved almost all of the complaints I had with the Old Fitzgerald 20 Year Old, which was also Stitzel-Weller whiskey that finished it’s aging at Heaven Hill. There were 12 barrels for that release and the finish was also nonexistent but in comparison the Old Fitz just seemed flabbier. Those extra proof points and the Van Winkle name come with a much heftier price tag though.

In the end, it’s hard for me to separate the whiskey from the history. When I pick up this bottle, when I sell this bottle at the bar, when I manage to sneak a sip of this bottle it’s not the whiskey I’m talking about. It’s the history. The liquid time that is carried over the tongue adds volumes to the value but is it enough added value? I’m not sure, but for the first time in a long time I find myself agreeing with a massive price tag on a massive whiskey. At least at the retail level. But if you have a spare $15,000 hanging around I know someone who might be accepting bribes…