Ever since Glenfiddich started promoting their Single Malt in the States in 1963 whiskey drinkers- especially malt whiskey drinkers, have been hammered with the idea that Single Malts and age statements are the mark of quality. And across the globe the
Japanese were quietly and efficiently sticking with the old school blending mentality and fine tuning all of the nuts and bolts. Ten years ago it seemed like no one knew that the Japanese even made whiskey and now they are some of the rarest unicorns on the market.

The big Japanese whisky houses are suffering from the same shortages and price inflation we’re seeing in the rest of the whiskey world.  With them it seems more noticeable because they only reached the mainstream consciousness here in the US so recently. But it’s not an artificial shortage. I just got back from a trip to Tokyo and even there the ol’ standards we came to rely on were nowhere to be seen.

They are moving to address this imbalance, and that’s part of the benefit of Suntory seeing themselves as a blending house as well; they have an internal system that allows them to adapt. In the US they’ve released Suntory Toki (which you can read more about here) to address our need for a Japanese Whiskey for cocktails. But the big shift for most people was discontinuing the Hibiki 12 and introducing the Hibiki Harmony.

The Hibiki’s have always been the ones that Suntory considers to be the highest form of their art and is meticulous in its attention to detail. The name Hibiki means “resonance” and is meant to represent the Suntory philosophy of living in harmony with people and nature. The goal is to create a harmonious balance between the malt and grain whiskies that make up the blend. Even the bottle is meant to represent that natural harmony. The bottle has 24 facets meant to represent the 24 seasons of the traditional Japanese calendar. This attention to detail and the quality of Hibiki didn’t go unnoticed and the 12 year especially became a fan favorite. But pricing and stocks have buried the 12 year and soon after it’s demise along comes the Hibiki Harmony.

Beam Suntory is quick to point out that the Harmony is not meant to be a replacement for the 12 Year. The Hibiki 12 Year was actually unique among the Hibiki blends in that it utilized a small amount of whiskey aged in plum wine casks. With rising demand, depleting stock, and this blending element only being used for this one bottling the decided to just stop making the 12 Year.

The Harmony is actually meant to be a more affordable available version of the Hibiki 17 Year with its hint of Mizunara (Japanese Oak) aging.  The Hibiki blends pulls whiskey from all three Suntory distilleries: Yamazaki, Hakushu, and Chita. The Harmony utilizes Chita Light grain whiskey with Yamazaki American Oak aged whiskey as the primary malt. The supporting players are Spanish Oak and that Hint of Mizunara with Hakushu Heavily peated malt for flavoring. The result on the Harmony is a very floral nose, with a hint of tart fruit and herb. The mid palate is rich, rich honey with a confectionary note but the touch of Mizunara is what brings it home with a touch of spice that lingers. It is a great introduction to the wider world of Japanese whiskey.

And again, this isn’t an artificial shortage. The bars in Tokyo were using the Harmony just as we are here in the states.  And I can appreciate the effort to simulate the 17 Year old. It’s always been expressed to me that the pinnacle of the House of Suntory style is the Hibiki 17 Year Blend, just as the Nikka “Yoichi” 15 Year Old Malt was the perfect expression of the Nikka style. As a side note, the former is now incredibly allocated and expensive while the later has been discontinued due to supply. Take that for what it’s worth. 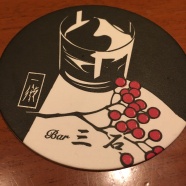 But in a world of vanishing age statements and soaring prices  I feel it’s hard for the general consumer to not see this as a replacement of a beloved bottle by a younger whiskey at a higher price. That’s not a problem with the Harmony though. That’s just the reality of the whiskey world we now live in.