Bourbon is full of history, tradition, and ancient family recipes.

Except when it’s not. (which is pretty much all the time.)

This call back to the golden days of our frontier forbearers is meant to impart some sort of permanence, stability, and a patriotic appeal to what is actually a relatively new spirit. Bourbon wasn’t defined as a unique product of the United States until the 1950’s. As far as the United States government was concerned the term “whiskey” wasn’t even defined until almost 1907. So, while the “Founding Father’s” of Bourbon were certainly making whiskey, they were following their own rules by making what felt like a good product to them. Most of the regulation like the Bottled In Bond Act were spearheaded by the distillers themselves looking for tighter control and quality of their products.

In the worst case this clarion call to the past is meant to mislead consumers, but even the best intentioned creates a consumer base deathly averse to change. This is antithetical to the alcohol industry needing to be an ever-evolving marketplace.

I still remember my first gut reaction of, “Why the hell would you do that” in the modern whiskey world. It was the label change on Henry McKenna Bottled-In-Bond.

Henry McKenna is a name that harkens back to the early days of the Kentucky distilling world. In some circles he’s as highly regarded as George T. Stagg and William Larue Weller, (very well regarded indeed).

McKenna was an Irish immigrant that moved to the Kentucky territory in 1838. Like many Irish immigrants at the time Henry worked on the railroads helping build the country’s early infrastructure. Also like many other immigrants he went into less backbreaking work as soon as he could.

He settled with his wife in Nelson County and by 1855 was a partner in a flour mill. Looking to make use of the spent grains they soon purchased a farm and soon after that were distilling about a barrel a day from the leftovers from the gristing process.

These early whiskies were almost assuredly all wheat but by 1858 the whiskey was had proved popular enough to hire a fulltime distillery manager and had begun distilling corn as well.

The whiskey produced at McKenna’s Nelson County distillery never carried the name ‘Bourbon’ but it was regarded to be of the highest quality. Newspaper at the time noted that McKenna never sold a drop that wasn’t at least three years old. There was even a bill introduced to Congress in 1892 asking for unlimited bond period on aging whiskey to prevent tax penalties on whiskey aging beyond the bond. This bill was known as “The McKenna Bill.” The next year McKenna passed away at the age of 75.

He left the business to his sons who had grown up in the distilling world. They managed the company until the advent of Prohibition forced them to mothball the distillery. But following Repeal James McKenna, a ripe 79, reopened the distillery with a distiller trained by his father’s original distillery manager supposedly keeping the family recipe intact.

James died in 1940 and the family sold the distillery to Seagrams, but not the original recipe. Seagrams marketed and produced Henry McKenna for decades until they dismantled the original distillery in 1976 and sold the brand to Heaven Hill in the early 90’s.

Under Heaven Hill two versions of McKenna are still on the shelves. The 80 proof Henry McKenna and the Henry McKenna 10 Year Bottled In Bond Single Barrel. You get one guess which one I love.

Not only does the Bottled-In-Bond meet all of the bonded regulations, it’s also 10 years old which is ancient in this shifting whisky scene AND it’s a single barrel so there is the possibility that each bottle you dive into will be different, a new variation upon the McKenna theme.

I’m spoiled and was able to purchase to Private Single Barrel a few years ago and haven’t tasted a regularly available bottling in a while. So, how does it stack up to all of that history? 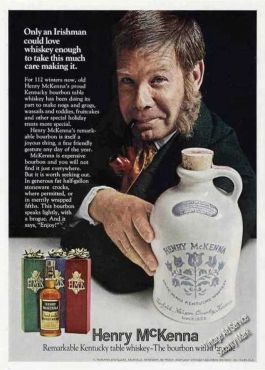 The nose is redolent of salted caramel, and the mid palette is all pistachio and pecan drizzled with vanilla and a dry, oaky, tannic finish. There is still a heat, and a rough around the edges quality from the its 100 Proof nature that hasn’t been fully tamed by its ten years in the barrel. It’s a whiskey that you can sip on but feels like it loves to be tossed around in a mixing glass as well, with plenty to offer a cocktail while not losing its identity.

This is most assuredly NOT the whiskey that Henry McKenna was making when he first set out to Kentucky nearly 200 years ago, but it is good modern whiskey. The label change I originally hated has grown on me and I’m sure that its updated look helped introduce it to a modern audience. Trying to stand on tradition alone can often leave us unable to see over the crowd, but perching on it’s shoulders can help show us the stage set for the future.